What to do in Glasgow around Christmas 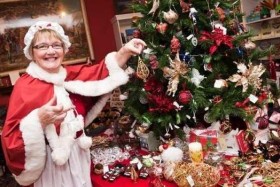 Europe’s biggest and best indoor carnival returns to the Glasgow SECC for another festive season.

Loch Lomond Shores is set to be transformed into a Drive-In cinema this Christmas. See your favourite Christmas movies on the world’s largest portable LED Screen.

The magnificent Sounds of Musicals show is back in Glasgow’s Royal Concert Hall this December, featuring songs from all your favourites and stars straight from London’s West End.

Raise the roof of the Glasgow Royal Concert Hall this December with the annual Christmas Carol Singalong featuring Kate Graham and The Consort of Voices.

Celebrate Christmas in elegant style at the Glasgow Royal Concert Hall this December with a concert of carols and seasonal classics accompanied by the Mozart Festival Orchestra!

This year, the Citizens Theatre are celebrating the festive season with the colourful, fun and exciting tale of Rapunzel!

Snow Pals at The Tron Theatre

Snow Pals is this year’s Christmas production for little ones in the Tron. A great way for the kids to join in a wonderful Christmas tradition.

The Tron puts its usual unique spin on a Christmas panto classic – this time Sleeping Beauty gets a Glaswegian update with Sleeping Betty!

Òran Mór’s annual Christmas Panto by Dave Anderson for grown up children is a not to miss Festive Season comedy treat!

If stressing in overcrowded shopping centres, lugging bags like a pack-horse, tripping over buggies and fighting over the last box of Christmas crackers sounds like a big Christmas nightmare, why not try a shopping trip with a difference.

Don’t miss out on this Glasgow Panto; this is sure to be a great show in the Pavilion tradition of fun, songs, dance, fun and more fun!

Anya, Kevin & Gary (formerly of The Singing Kettle) are back with a brand new family show, Fun Box, and are bringing it to Glasgow’s Royal Concert Hall in December!

The ever popular Glasgow On Ice will return once again this year, marking the beginning of Glasgow’s festive season, and promises to be better than ever!

The King’s Theatre have announced that their 2015 panto will be the magical fairytale: Snow White with Scottish comedy legend Gregor Fisher leading the cast.

David ‘The Hoff’ Hasselhoff has confirmed he will playing Hook in this year’s SECC panto: Peter Pan!